Donations to the Mineralogy Museum in 2019

For the year 2019, we are looking for donations that will improve our permanent exhibition, complete our collection of reference and systematic samples, of French minerals, and expand our collection of gems and meteorites. New species and mineral varieties are constantly being discovered (about 50 new minerals per year!) and new deposits are being mined, producing samples of interest (example: the new production of yellow brucite from Pakistan). We intend to improve our exhibitions on gemstones, completing the exhibition on the Crown Jewels of France. For meteorites, we are looking for achondrites (primitive achondrites, nakhlite and chassignite, aubrite, ureilite, angrite and brachinite), pallasite (such as the new find of pallasite from Kenya or spectacular pallasite) and chondrite (enstatite, and carbonaceous chondrite). The word is out!

Donations from individuals and institutions

- A 4.3-ct ruby (corundum) from Mozambique (#83669), donated by l'Ecole - School of Jewelry Arts (supported by Van Cleef & Arpels). The picture below doesn't do it justice: it glows bright red and could be confused with a Burmese ruby, if it were not for the typical inclusions it contains. This little jewel is visible in our new "GEM" display. 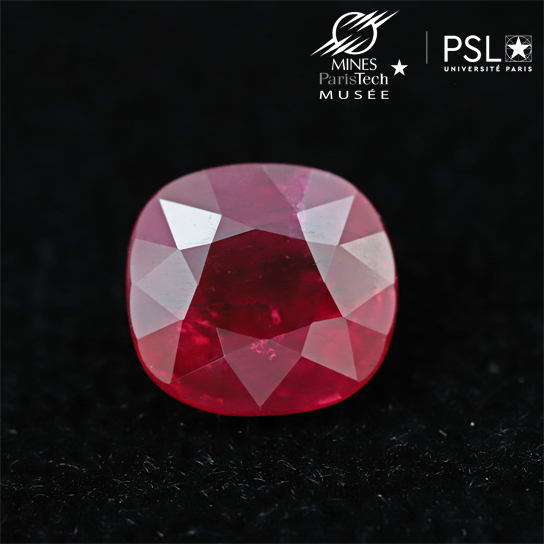 - Three opals from the State of Piaui, Brazil, collected at the mines of Mamoeiro (83666), Boi Morto (83667), and Roça (83668) by Dominique Dufermont, who also donated those specimens. Precise locality is very important to us as these kind of samples will serve as reference specimens. 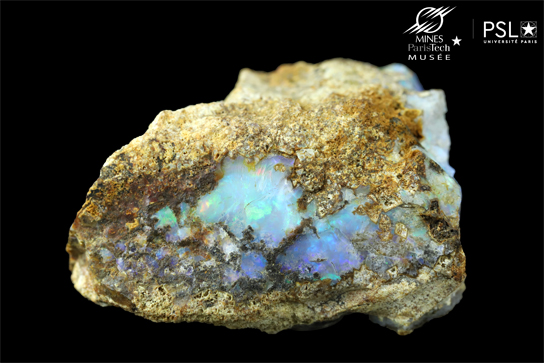 - A polished play-of-color opal from Mezezo, Shewa Province, Ethiopia, was donated by the company OPALOGY represented by Thomas Cenki. This sample shows the "digits" or "cells", typical of Ethiopian opals. The visible fracture on the sample was naturally reconsolidated by a new silica precipitation in the fracture. On this opal, only "cells" show play-of-colors. To learn more about the formation of these "digits", see the article by Rondeau et al. (2013). 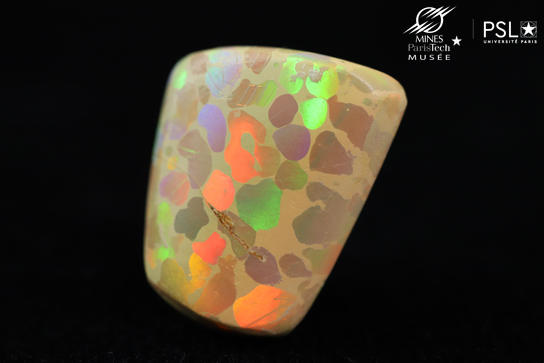 - A play-of-color opal nodule from Mezezo, Shewa Province, Ethiopia, was donated by the company OPALOGY represented by Thomas Cenki. This sample shows the "digits" or "cells", quite typical of Ethiopian opals. The nodule is also indicative of the mode of opal formation in this deposit: the opal precipitates in the cavities of the rhyolitic volcanic rock, in the vacuoles left empty by the gas bubbles of the magma. 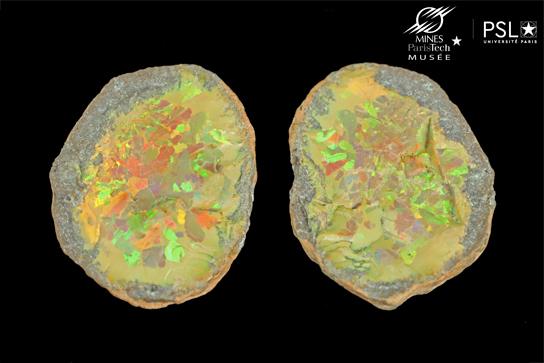 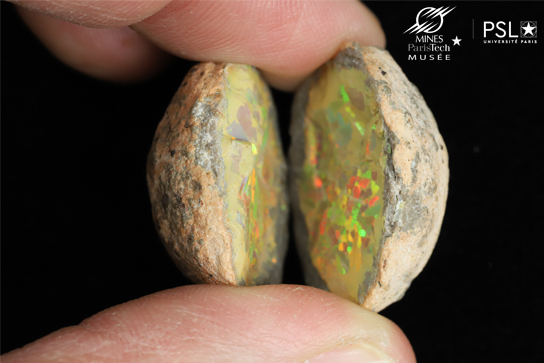 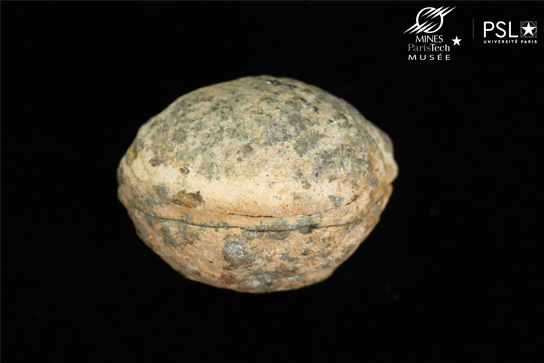 - A fragment of the Tatahouine meteorite (achondrite, diogenite, # 83663), donated by Mohammed HMANI. This atypical meteorite fell in Tunisia on June 27, 1931 and contains large green crystals of pyroxene. Diogenite is a type of meteorites that could well represent a part of the crust of the asteroid Vesta. 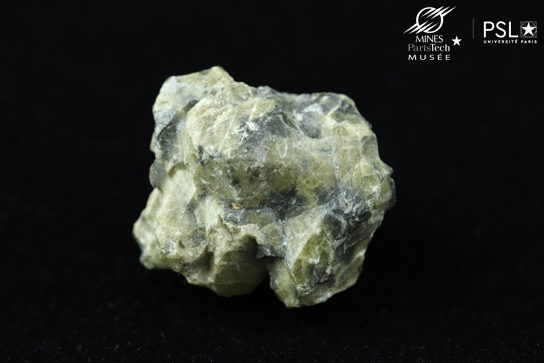 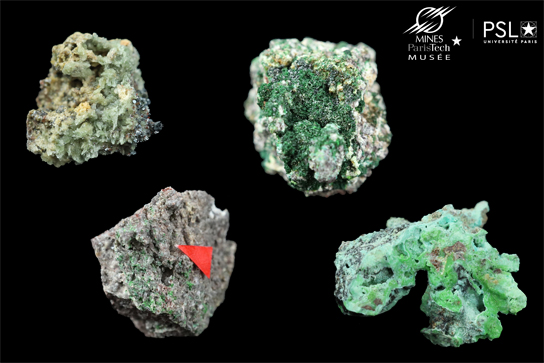 - Cuprite on a matrix covered with chrysocolla, coming from the Etoile Mine, Katanga, Dem. Rep. Congo, given by Christophe Gobin (# 83657). 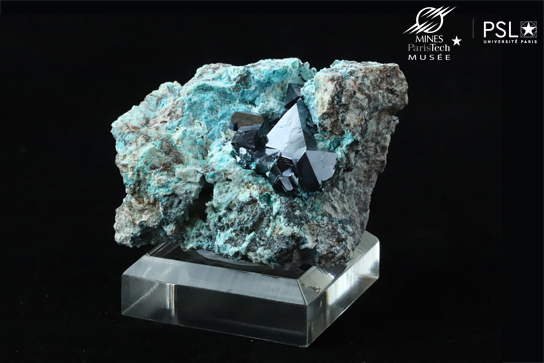 The Association of Friends of the Library and Collections of the Paris School of Mines (ABC Mines) is supporting the museum, with this year:

- From the recent discovery of Santa Eulalia District, Chihuahua, Mexico, an association of twinned calcite, partially covered with palygorskite and romanechite, covered on the top with a new generation of cream-color calcite (#83688). 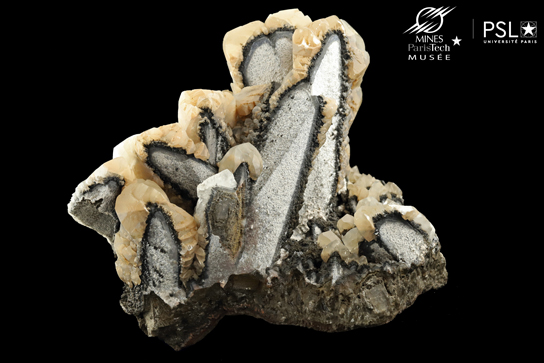 Association of twinned calcite, partially covered with palygorskite -white) and romanechite (black), covered on the top with a new generation of calcite (cream) (#83688; 24 x 21 x 16 cm ). 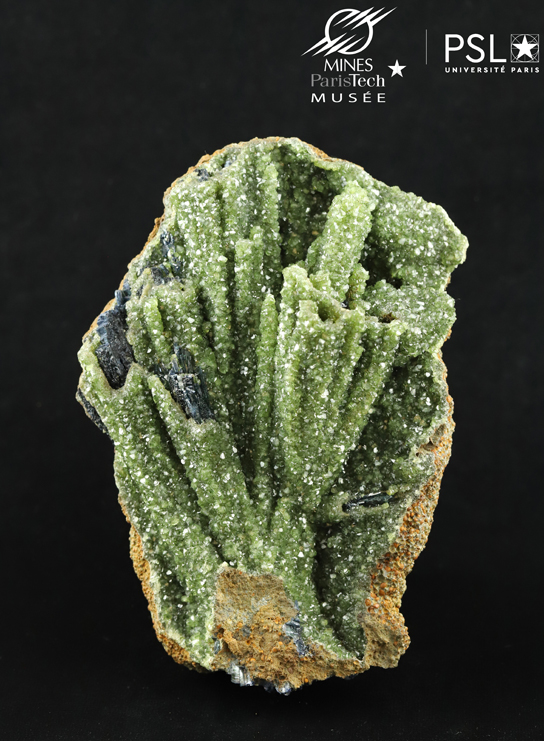 Ludlamite on vivianite (#83687; 18 x 12 x 7 cm), from Cabeça do Cachorro, Amazonia, Brazil. Both minerals are iron phosphates, with linked crystallization, ludlamite being less hydrated than vivianite. 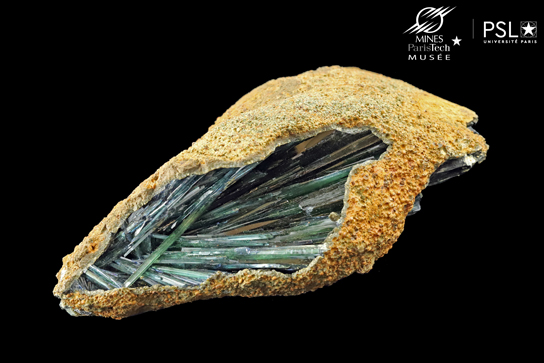 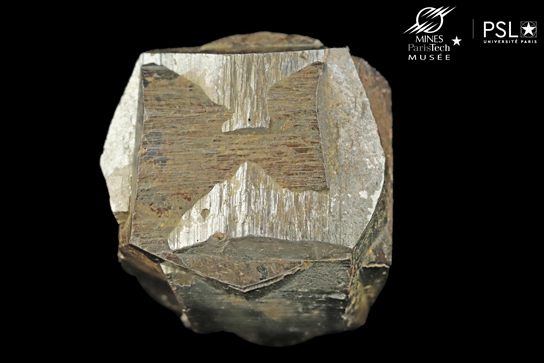 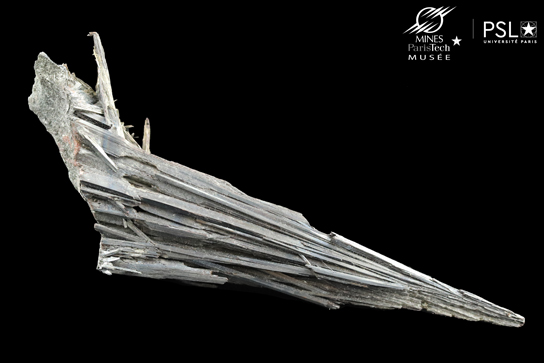