History of the School of Mines and of the Collections

The 18th century: Creation of the School of Mines

On the right, Balthazar Georges Sage, first director of the School of Mines until 1790.

Until the mid-18th century, mining was largely unregulated in France despite many efforts to control the practice. For example, Charles VI wrote patent letters in 1413, granting privileges and therefore duties to mine owners and miners and Louis XI issued a "Decree on Mining in the Kingdom" in 1471. Additionally, Henri IV issued Edits in 1597, 1601 and 1604 related to mining. However all these efforts were in vain, and at the end of the reign of Louis XIV, absolute freedom was given to any landowner to exploit the soil (the basement under his property), thus giving rise to a multitude of small, but disastrous, mining ventures.

However all that changed when in 1739 the regulation of mining fell under the control of the ministry of “Mines et Ponts et Chaussées“ led by Intendant Trudaine. Shortly thereafter the order of January 1744 redefined French mining law, guaranteeing independence of land and basement ownership, and allowing mining only after approval of the State.This order also established clear technical regulations for mining operations.

Creation of the School of Mines

In order to have functional mines, the French government needed engineers and technicians. Previously, French mine owners hired foreign specialists, predominantly from Central Europe. These first mining engineers built a large industry in less than a hundred years and transformed the art of mining into a real science. During this time, mining enginers and scientists developed a favorable intellectual environment, writing treaties, translating works on ore and mining, and giving "mineralogical trips". Beginning in 1766, mine dealers paid taxes for a future “School of Mines”. The following year, Guettard, aided by Monnet, started the French inventory of mineral resources. In 1778, Sage, a distinguished mineralogist, succeeded in creating the Public School of Mineralogy and Ores at the Monnaie Hotel. He brought along with him his personal collection, and was the only professor.

Thanks to his school and the “flowery” classes he gave to high-class enthusiasts, Sage laid the foundations for the proper School of Mines, which was created March 19, 1783 with approval from the Board of King State.

The French Revolution and the Empire

The French Revolution and Mineralogy Collections

A public decree issued July 12, 1794, reorganized the School of Mines. The School was placed under the authority of the newly created Mining Agency. The School also moved to the Hotel de Mouchy located at 293, rue de l’Université in Paris, at the present site of the Ministry of National Defense. Additionally, the decree specified the creation of a Cabinet of Mineralogy to contain all Earth materials and productions, classified by locality. In order to do this, mining engineers gathered fossil substances and sent properly labeled collections to the Mining Agency. The Mineralogy Cabinet was completed by private collections, some of which had been seized by the Committee.

In October 1794, Haüy (portrait above) was appointed curator of the Mineralogy Cabinet and Jérôme Tonnelier as director. In 1795 the School of Mines purchased the Nottin collection acquiring the largest Cadix sulfur, some beautiful nagyagites, and some siderites from Allevard. In 1796, the Mining Agency received the bulk of the Boutin collection (former Treasurer of the Navy), much of which came from the sale of Jacob Fosters’ collection (collector and English merchant, 1739-1806) in February 1783.

Departure for the Sarre and the Alps

In February 1802, after eight years in Paris, a decree from the Consuls established in place of the Paris School of Mines two practical schools for mining operations. The first would be installed in Geislautern in the department of Sarre (nowadays in Germany) and would specialize in iron, coal, metallurgy and mineral processing. The second one would be in Pesey in the department of Mont-Blanc and would specialize in nonferrous metals and salt springs. These schools were hardly created. The practical school in Mont-Blanc was only opened in 1803 but then quickly moved to the nearby town of Moutiers by Schreiber. Both schools disappeared with the end of the Empire in 1815.

The School of Mines in the Vendôme Hotel in Paris

In December 1816, a Royal decree re-established the School of Mines in Paris.The school relocated to the historic Vendome Hotel, built in 1707, where it has stayed until this day. In the middle of the 19th century, the Vendôme Hotel was refitted with paintings and the cherry wood furniture which, even today, houses the museum's collections.

The 19th century: the installation

In August 1815, the School of Mines moved to the Hôtel Vendôme. The next year Villiers Brochant formed a new mineralogical collection consisting of 800 specimens classified according to the French system. In 1819, Dufrénoy added the so-called "orictognostique" collection. A year later, the collection grew to nearly 4,000 samples, due to the additions of the Heuland collection, the Lefebvre Hellancourt collection, the Patrin collection (beryl, topaz, and zircon from the Urals and Siberia), specimens from the School of Mines of Moutiers, and beautiful azurite and cuprite from Chessy given by Jars in 1817.

Between 1825 and 1845, the Mineralogy Collection received or acquired the collections of Lelièvre, Héron de Villefosse, Paillette, many samples from the Urals and Siberia, Transylvanian specimens sent by Haidinger, and many Chilean minerals given by Domeyko. In 1845, the collection included 5,600 specimens of medium size and 860 of large size. The collection grew with the addition of the famous collection of Marquis de Drée (15,000 samples), which included minerals, rocks and volcanic products (3,400) put together by Dolomieu, the Marquis’ brother-in-law.

Until the late 19th century, the Mineralogy Collection increased steadily through donations or acquisitions of exceptional samples.

In 1850, the large Iceland spar (optical calcite) currently exhibited in the entrance hall was purchased for the large sum of 3,000 francs. In 1855, Rivot gave to the museum a superb series of native copper samples from Ontario. In the 1860s and 1870s, sample entries were numerous. For example, in 1876, 250 samples were donated encompassing 80 gifts by 40 mineralogists and collectors, including five original friedelites from Bertrand, a daubréeite from Domeyko, a daubréelite from Lawrence Smith, and specimens from Seligmann, Mallard, Nordenskiöld, Grüner, Lucas Mallada ...

In 1881, the museum recieved the famous Adam collection (7,000 specimens), made interesting by the rarety of its minerals, as if Adam was looking to form the most complete collection of mineral species. In 1888, the School recieved the Delessert collection, which contained about 15,000 minerals.

Upon the sale of the French Crown Jewels, the museum recieved a number of precious stones attributed to the collection, including some emeralds, pink topazes, and amethysts. Alibert, the famous discoverer of Siberian graphite, donated to the School many specimens of graphite, jade, lapis lazuli, etc. Many donors, including Eckley Coxe and Thomas Egleston, two former foreign students of the School, provided many splendid specimens. 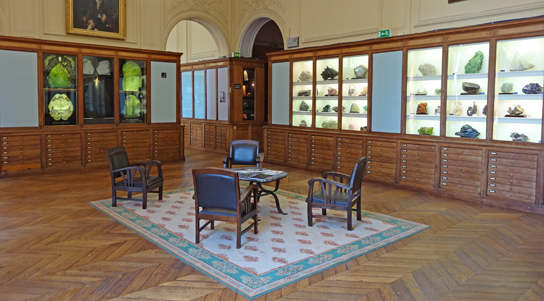 A tough beginning of the 20th century

In 1903, the New Emerald company gave to the Museum two magnificent emerald specimens on matrix from Takovaïa in the Urals. In 1910, the School of Mines received the legacy of E. Bertrand, a collection of 2,000 pieces of exceptional quality and scientific interest. If the years before the World War I were still generous (1900-1913: 1,760 samples), the following years WEre almost insignificant in terms of acquisitions (400 specimens FROM 1920 to 1939, including the gift of the Wendler collection in 1936). In 1945, the collection was plunged into a hiatus like all French public collections. Collectors, teachers, and mineral enthusiasts went missing, and the prominence of the mineral collection receeded. The curation of the Museum of the School of Mines also suffered since as many specimens as possible were exhibeted, and were then classified according to the completely outdated system established by the "Treaty" of Dufrénoy in 1859.

Despite its destructive fury, World War II saw great advances in the geosciences. The post-war years witnessed a search for new materials and energy products to boost reconstruction and economy recovery. In France and around the world, the pressing need for mineral resources drove an extraordinary expansion of geological science and a renewal of mineral collections.This revival began in 1949 at the School of Mines with the purchase of Glasser’s collection of several thousands of small (1-3 cm) but well-crystallized specimens.

The systematic classification of minerals

In 1957, the administration of the School of Mines asked Claude Guillemin to reorganize the collection. Guillemin undertook this task in cooperation with the Bureau of Geological and Mining Research (BRGM). The reorganization work lasted five years.

The re-arrangement was not the only thing needed to improve the collection.In addition, there were far too many specimens on exhibit in the museum, and in order to showcase the best minerals, some needed to go in storage.

From 1957 until 1990, the collection grew rapidly thanks to the activity of the “Mineral Species Conservation Service” (SCEM), which was created by the Bureau of Geological and Mining Research (BRGM) to collect, store and redistribute mineralogical samples.

In 1988, the “Friends of the Library and of the Collections” association (ABC Mines) was founded to continue the enrichement work of the Mineral Species Conservation Service (SCEM) which disappeared in 1990. From 1992 to 2012, under the direction of Lydie Touret, and since then under the direction of Didier Nectoux, dozens of samples from recently discovered deposits (Pakistan, Tanzania ...) or from countries that have recently opened up to mineral trading (China, Vietnam...) have been acquired by ABC Mines and donated to the museum of the School of Mines.

Birth and evolution of the Mineralogy Museum - MINES ParisTech
Partager