in the Mineralogy Museum Collection

The Mineralogy Museum owns a collection of historic fragments of the Canyon Diablo meteorite, the largest of which weighs 226.80 kg (500 pounds) (total of all fragments = 266.5 kg =  587,5 pounds). Alumnus Eckley Coxe offers this large fragment soon after the discovery of meteorite fragments at Meteor Crater in Arizona. It is on this large fragment that Charles Friedel, curator of the museum at the time, confirmed the presence of micro-diamonds, formed during the impact of a huge meteorite (30 tons?) with Earth. To conduct his experiments, he had a slice of the meteorite made, then publishing his results in 1892*. This slice is also on display at the Museum. Another superb specimen is the 78-pound slice bought thanks to Egleston Fondation, from Alumnus Thomas Egleston who is the founder of the New York School of Mines.

Diablo Canyon is a siderite (iron meteorite) belonging to the IAB -MG group.

Here are the Canyon Diablo meteorite specimens in the School of Mines collection, with pictures of each sample.

Donors of the fragments of the Canyon Diablo meteorites:

Eckley B.Coxe (1839-1895). The founder of the Institute for Miners and Mechanics of Pennsylvania.

EB Coxe was a student of the Paris School of Mines from 1860 to 1862. He made a fortune in anthracite mining in Pennsylvania State, State for which he became senator in 1881 and 1883. Coxe is also one of the founders of the American Institute of Mining Engineers and of the publication “The Transaction”. He annually gave important mineralogy specimens to the Mineralogy Museum, including the 500-pound fragment of the Canyon Diablo meteorite, now on exhibit. 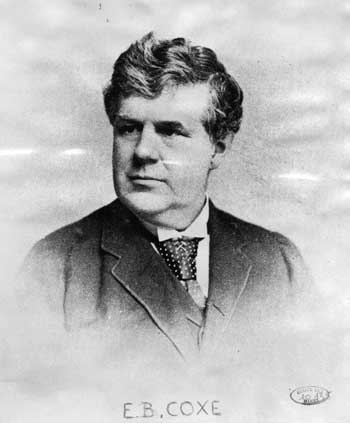 Egleston was a student of the Paris School of Mines from 1856 to 1860. Returning to the United States of America, he stopped at the Smithsonian Institution and founded the School of Mines of Columbia College, which opened on November 15, 1864. In addition to the specimens he regularly sent to the Paris School of Mines, he donated 10,000 US$ in 1897 for purchasing minerals for the collection, which will all be listed under the term "Foundation Egleston". 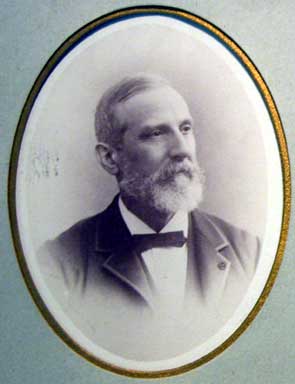 The giant crater of Canyon Diablo has been the subject of much debate. Scientists have long thought that this crater was the fact of an extinct volcano. Yet no volcanic rock has ever been found, although some rocks could look like it. It was not until 1950 thanks to the study of Eugene Shoemaker that it was determined that this crater was caused by a fall of a large meteorite. We now know that this meteorite fall occurred about 50,000 years ago, producing a crater of 1.3 km in diameter and of 175 m deep. The violence of the impact corresponds to an energy released comparable to 1700 kilotons of TNT explosives, or 133 Hiroshima bombs!

Terrestrial rocks affected by the impact have been transformed, some resembling breccias that are sometimes found at the base of volcanoes, therefore the original confusion of scientists. Many meteorites have been found on the fields around the crater. These meteorites are iron meteorites (differentiated), and show incredible crossing patterns ("Widmanstätten patterns" ) after an acid attack.

It is on the fragment of 500 pounds presented at the Museum of Mineralogy that curator Friedel confirmed the presence of micro-diamonds, formed during the impact. To do his research, he ordered to make a slice of the meteorite, on which he led his experiences, which were results published in 1892. The slice is also on display at the Museum.

Canyon Diablo meteorite fragments were also parts of many studies that enabled to determine the age of the Earth at about 4.55 billion years, thanks to isotopic analyzes on Uranium - Lead conducted by Clair Cameron Patterson in 1956. 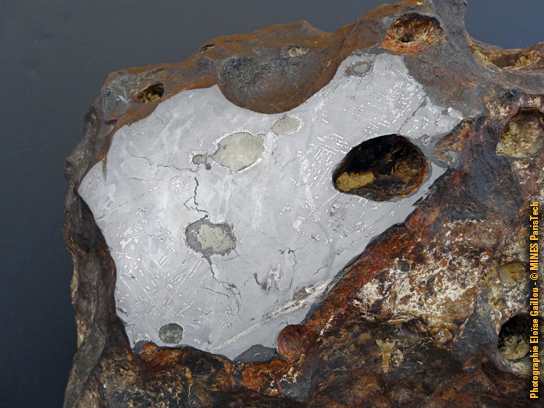