When a new mineral species is described, the array of physical, chemical and crystallographic analyses and tests are performed on a single “type” specimen. Nowadays, each type specimen must be preserved and deposited in an institution, usually a museum, in order to allow future access to it.

Outside of the holotype, cotypes and metatypes, there exist the « author’s samples ». These samples are not necessarily the ones used for the description of the species, but were once owned by the authors of the mineral discovery. Such samples are usually from older studies, and unless they come with specific notes from the authors himself, they cannot be taken for granted.

Mineralogists also label “beneficiary” samples as samples that were given by the person to whom the mineral was dedicated (usually the person that lent their name to the mineral). This category has less interest since nothing really proves that the beneficiary sample really corresponds to the mineral studied by the author.

Since 1957, a systematic research of “type” samples of old species was conducted in the collections of the School of Mines. We now preserve the majority of type samples described in France since the Second World War. We continue acquiring such interesting specimens thanks to a worldwide collaboration between labs and institutions.

All of those samples, to the total of 700 type species or variety, are preserved in a separate cabinet. The scientific importance of this collection led us to write a detailed catalogue that was published in 1983 for the bi-centenary of the School of Mines. 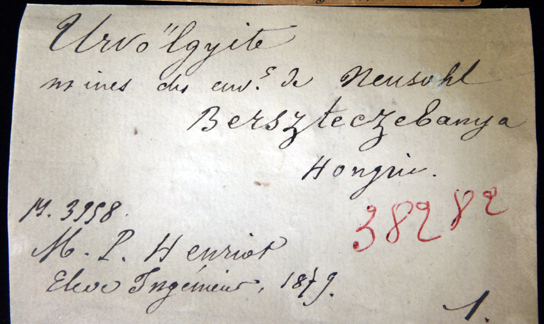