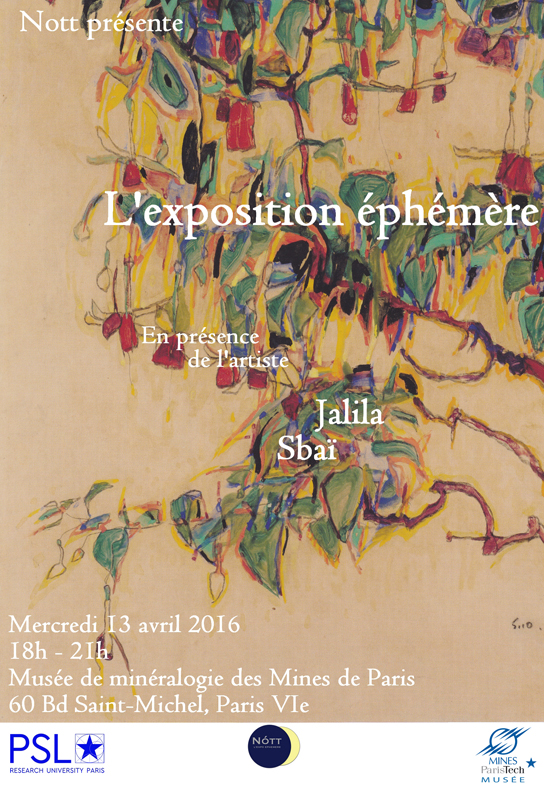 - April 1 to 9, 2016 (Opening on March 31, 2016): Temporary exhibition, "Songes de pierres" by Paris-based Bristish artist Amy Hilton, in collaboration with Galerie Fatiha Selam. Opening on March 31st from 6pm until 9pm: the exhibition begins in the framework of the week of numerous modern and contemporary drawing art fairs taking place in Paris. Paintings inspired by stones and minerals, in which fluid shapes seem to move on paper; contellations of black ink dots where the viewer is invited to connect invisible lines are just a few of the works on exhibition. More to discover, click here! 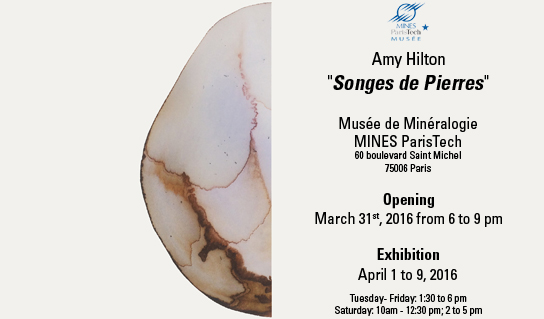 - January 19 to March 19, 2106: Temporary exhibit “Les Cristaux” (Crystals) by artist Milène Guermont. The exhibit is offered by Synesthésie in partnership with Némo (“Biennale internationale des arts numériques”). Around 30 pieces of artwork are spread out through the museum, creating a dialog with minerals and artworks made with concrete by Milène Guermont. To know more, please refer to the webpage dedicated to the exhibit. 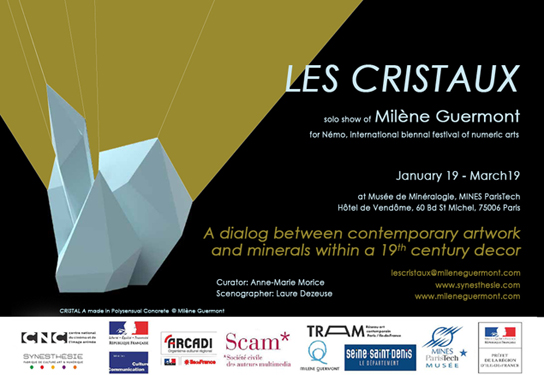 - April 8 to May 16, 2015: temporary exhibit “Landscape Studies”. This exhibit presents artistic researches conducted by Clément Verger over the last few years. The project assembles several parts on the construction of landscapes in exhibit spaces. By a work on images but also on the photographic subjects, Clément Verger wants people to pay attention to the ways that men shape natural spaces in order to adapt them to suit their needs and desires. He is interested in direct interventions on the territory, but above all, he explores the way spaces make sense through their visual arrangement.

The pictorial composition such as the post card or the satellite image are as many cultural references with which the artist plays with, in order to understand how the landscape invents itself in and by the act of seeing it. Playing with the cliché and the strange, Clément Verger invites a reflexive contemplation, a critical question about the relationship of the contemporary man to his environment. Both exhibits offer a journey through different ways of doing things, redo or undo the landscape.

January 13 to March 31, 2015: “I classify, you classify, we classify… minerals”. The mineral world is full of an astonishing diversity. How to order these different shapes, colors? This exhibit talks about the different ways to classify that were proposed over time. It is both a fabulous scientific history and an illustration of the thought process that was put into place by humanity to comprehend the world.

June 9 until October 11, 2015: The Mineralogy Museum loaned some minerals for the temporary exhibit "Lapis Lazuli: Blue Magic" that was hosted at the Museo degli Argenti, Palazzo Pitti in Florence, Italy. 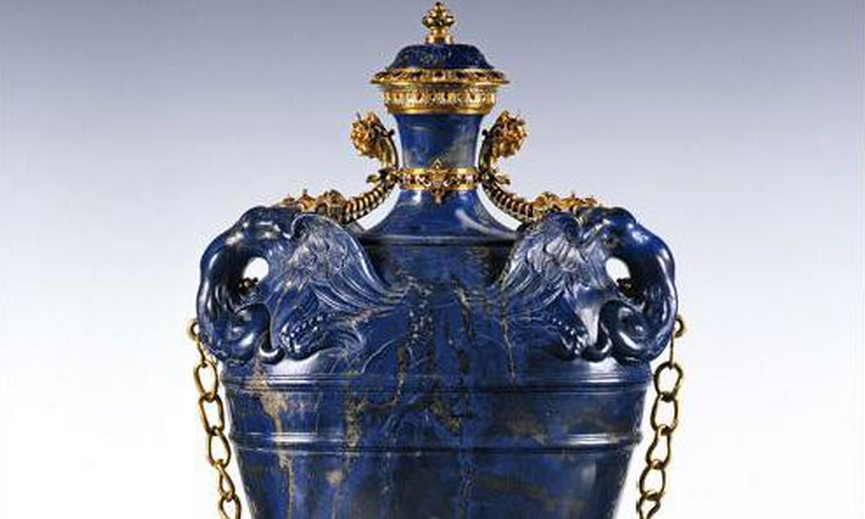 June 25 to 28, 2015 in Sainte-Marie-aux Mines, France : The Mineralogy Museum MINES ParisTech was exhibiting some minerals during the special exhibit at the Mineral & Gem show that happens every year in Sainte-Marie-aux-Mines in the Alsace region. The temporary exhibit that has a dedicated space at the show was about the "Minerals of the Alps".

One of the numerous display cases at the Sainte-Marie-aux-Mines show, within the temporary Prestige exhibit. Some of the minerals are part of the Mineralogy Museum collection.

Some important past exhibits

May 31 to June 2, 2013: “Geo-snapshot: the ephemeral petrified”. Geology is the science of time. Minerals, rocks, fossils tell story over hundreds of millions of years of the Earth history. But sometimes, rocks keep the memory of an instant. Rain drops, lightning, traces of steps become eternal. Find more information thanks to this document. 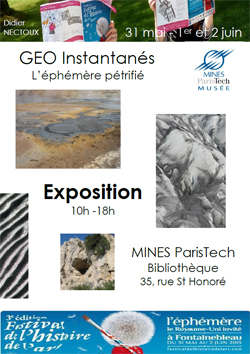 May 5 to August 28, 2010: “Our Earth, this treasure”. Beyond their appearance, minerals and rocks are not only objects of culture or curiosity, but also constitute a priceless natural patrimony that needs to be preserved. They lead to the knowledge of our complex and dynamic Universe from which they originate. For the first time, some of the most spectacular minerals on Earth, rough or facetted have been gathered in Paris for this special exhibit. Beyond their beauty, this exhibit tells their story, while giving clues that enable to better understand the message they have to give. 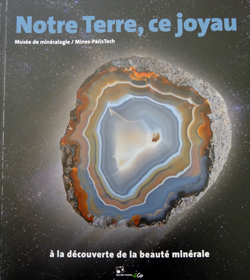 June 20 to March 21, 2007: "Etna, from the abyss to space". Paris School of Mines has partnered with the Space Observatory CNES for this special exhibit. The Mineralogy Museum showcases its historic and scientific heritage by presenting samples collected during the historic eruption of 1669, the work of geologists and Dolomieu Elie de Beaumont on the volcano, as well as modern instruments used by volcanologists. The exhibit connects the past to the future: a story that deeply marked the evolution of thoughts in the fields of petrology and volcanology, and by the vision of space, controls of one of the greatest threats hanging over the fragile balance of our planet 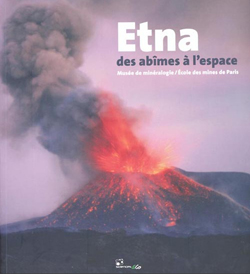 November 25 to December 29, 2000: "Coups d’éclats" This exhibits brings together Art and Science and aims to make the public discover the old art of the gem cutter, his expertise and his creative passion. Thanks to the loans of works from the lapidary family Henn and the collection of the Museum of Mineralogy, the visitor will appreciate the masterpieces of nature, which will lead him to questioning the mineral world and what it tells us about the history of mankind. 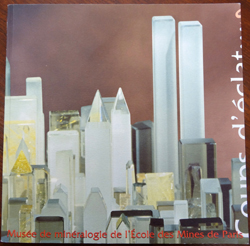 December 1993 to March 1994: "René Just Haüy: the soul of crystals" The celebration of the 250th birth anniversary of this illustrious character will allow the public to better know the life and work of this great scientist and understand the tremendous momentum he gave to mineralogy. 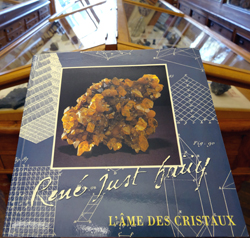 Exhibits that happened at the Museum - MINES ParisTech
Partager